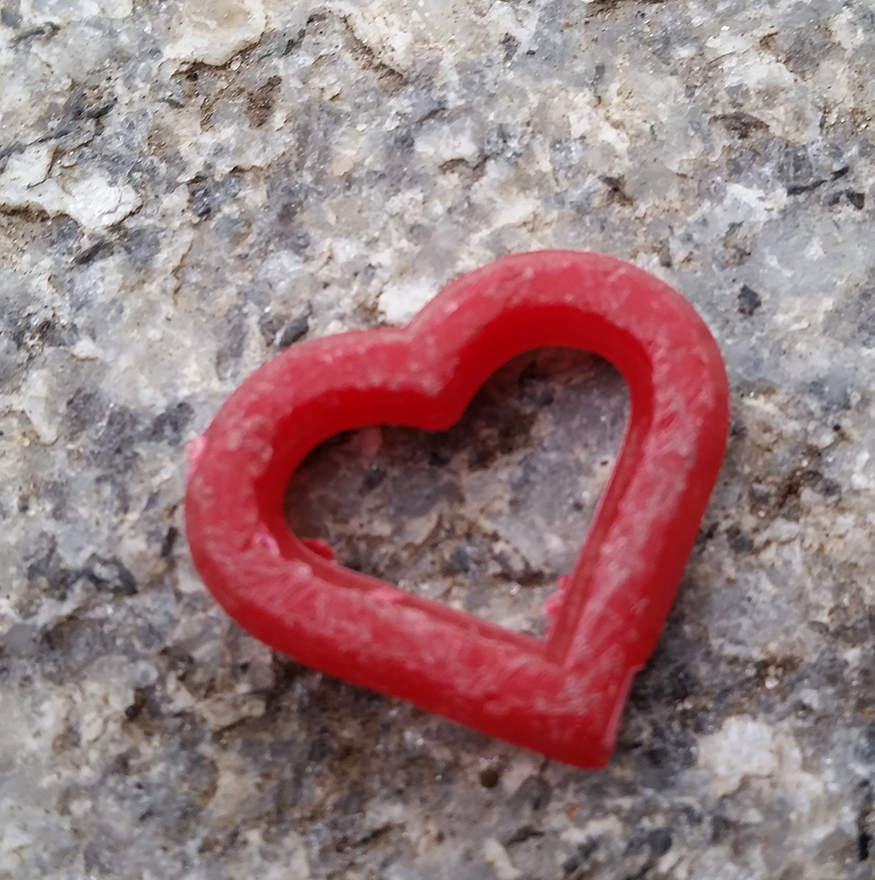 A small plastic heart caught my eye on the way to work. I picked it up, thinking I’d give it to someone in the office recovering from cancer treatment. As I continued walking down Third Street, I began to enjoy holding it in my hand. I noticed that it was a bit scuffed up and had been abandoned – but was now appreciated again. It had been made in a factory, probably in China. It was made to give pleasure, to touch the human heart and now it was touching mine. I wondered how it had touched hearts in the past – how many? Who had enjoyed it before?

At some point, someone had dropped it on the sidewalk. Did it fall off a greeting card? Was it a plastic charm on a child’s bracelet? Was it a token, a remembrance? A favor from a birthday party? No matter where it came from, it was communicating to me that love is sometimes found where you least expect. We need to keep our eyes open for it.

Carrying the heart brought me out of my concerns about the deadlines-du-jour and brought me back to the central message of God’s love and our love for each other. Someone’s love for someone else is the reason that heart was on the sidewalk. It’s hard to believe that anyone would discard it on purpose. Maybe someone found herself without the heart and felt sad.

I took its picture to share with you. It’s an invitation to take a step today to heal a relationship that may be a bit broken right now. The scuffed-up heart nudges us to heal our scuffed-up hearts.

A block away from work I realized that this red piece of plastic is the “heart” of Third Street. This is the public heart, the little heart reaching out to passersby who need what it has to give them and it’s not mine to keep. So I left it on the Third Street concrete for the next scuffed-up heart who needs it.