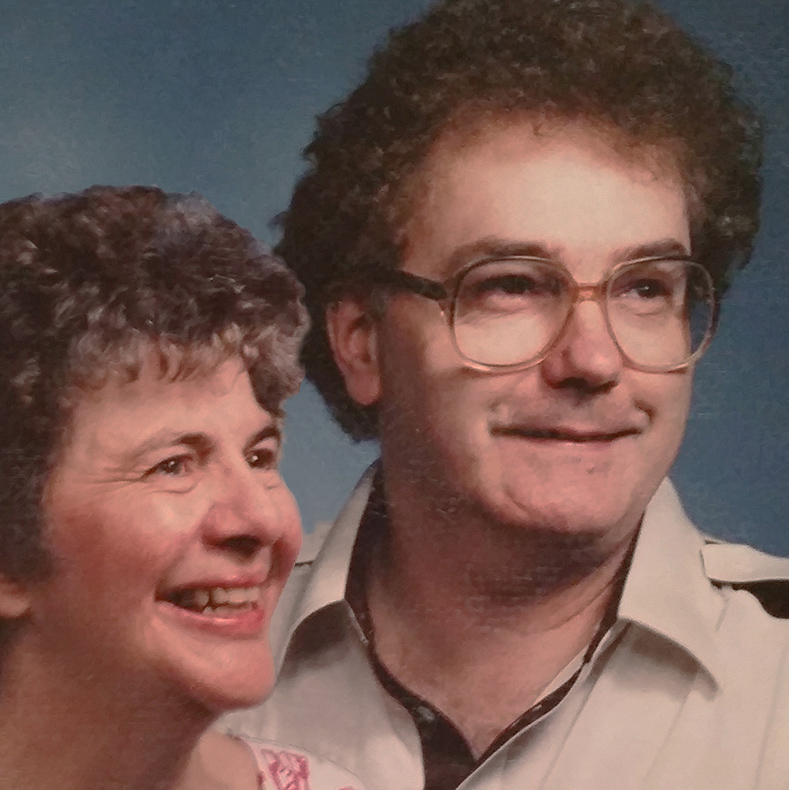 The 56-year-old woman slumped over the arm of a wheelchair near the nursing home elevator was my mother, Sylvia, two weeks after her hemiplegic stroke. After discovering her in this perilous situation, her best friend and future husband, Thomas Aquinas Roberts, scooped up all 100 pounds of her and drove her home. They haven’t been back since.

That was 28 years ago, and Tom has remained Sylvia’s sole caregiver. Until recently, that is. A homeless married couple they had known for years moved in last September to help. Tom insists that despite going on occasional heroin and Smirnoff binges, Don and Cindy are far less trouble than trying to rely on home health agencies.

Tom is my stepfather, and also my godson. He and Sylvia became Catholic a year before their marriage in 2001. “The way Catholics take care of each other,” is the way he describes his attraction to the Church.

Below are excerpts from some of Tom’s letters. Sometimes searing, often humorous, they give a glimpse into the day-to-day exhaustion, struggles, and victories of a remarkable Christian husband.

“Sylvia just came back from Office Depot, beaming. A parade of medium-sized plastic objects preceded her as might have been borne by footmen in earlier times. For a week, Don and Cindy had been offering to take her. Today, she took them up on it.

“Our lives have contracted greatly. Other than attending my friend Todd’s bible seminar, there is Sylvia’s care. Her needs increase gradually, so I adapt.

“Sylvia and I watch lots of DVDs together. We call it our favorite sport. We’re currently watching a DVD course that links Sylvia’s favorite topic, plate tectonics, with biological history. Interestingly, she grasps this well, in contrast to the planning ability she lost with the stroke. I enjoy them and am willing to cut back on DVDs of Highway Patrol with Broderick Crawford, the intellectual equivalent of eating Jujubes at the movies. And I get to watch Sylvia watching television.

“Don has been back on work-release starting Wednesday. Todd and I went off on a two-hour sightseeing drive. When we got back, Don had a whole lot of stuff done: eaves cleaned and repaired, floor tiles replaced, garden weeded. When he’s clean and sober, he shoulders the burden like no one else. It’s a direct antidote to the chronic fright I feel of being swamped.

“I’ve been feeding Sylvia articles on Neanderthals. It is now known that we Europeans are 3-4% Neanderthal. This gets Sylvia excited. She has followed the controversy for years, wanting to be part Neanderthal more than she has ever wanted large plastic objects or office supplies. I told her that Neanderthal blood is what attracted me to her in the first place. That made points with her. So, I’ve promised her we could make a big thing out of this by greeting trick-or-treaters with a sign: NEANDERTHAL MELANGE WOMAN INSIDE: RING DOORBELL.

“Here, in a nutshell, are the results of my visit with Dr. Valmos: ‘Decrease stress, emotional and physical. You are to decrease your workload.’ (I’ll have to figure out how to do that.) ‘You have a high risk for heart attack and stroke. You are doing the work of five people.’ Anyway, that’s the assignment. I’ll try to do my job.

“Cindy has been living here two days and it is working well. Yesterday I was able to make off with Todd for two hours. We drove around the city and county, discussing everything from scripture to valveless axial engines. With Cindy in residence, there will be no problem now getting to Mass or bible seminars.

“What a reversal. The first four days with Cindy were wonderful – what a help! Today she got drunk. At 4:00 pm, she called from the basement. I found her on the floor in the furnace room. She had wet her bed and had crawled all the way to the laundry dragging her sheets. I got her up the stairs and found her dry clothes. I told her she was too drunk to shower. She did anyway and I had to rescue her because she was halfway off the bath bench – a wet whale. I washed her sheets and made her bed.

“Her stash of booze included three 1.75 liters of vodka, all opened, and a case of high-alcohol beer and a bottle of rum, opened. It was all clustered around the head of her bed.

“While I was trying to prevent Cindy from getting hurt in the tub, Sylvia pooped her pants and the bedroom carpet.  She and it are all cleaned up. I’m about to shower to get Cindy’s urine off me. In between, I called Todd to tell him I’ll miss the bible seminar tonight; three weeks of study and composition on Numbers and Deuteronomy from printer to wastebasket. I guided Cindy downstairs and put her to bed.

“Today I’m letting gravity take over. I’m wiped out but otherwise in good spirits. I’ve seen two naked women this week. One of them got her piss all over me. Water sports – what a story to tell the guys.

“Conditions have improved since I poured Cindy’s gallon of vodka down the kitchen sink. There have been no reports of sewer fires. Cindy is once again helpful. And bright.  I showed her the formula for a chemical compound that our high school chemistry teacher wrote on the blackboard: HIOAg. It took her only 15 seconds to say, ‘That’s Hi-Yo Silver!’ Buying her a TV was a good move. She can retreat downstairs, and does. This creates the space Sylvia and I need.

“We received our complete Murder, She Wrote! series with Angela Lansbury. The outstanding statistic, if one Googles Cabot’s Cove, is the murder rate: 50% higher than Honduras and even higher than El Salvador. What fun!

“Sylvia has periods of hostility toward Cindy when she is dressing her or cleaning up poop emergencies, but Cindy is very patient, even loving. That’s helpful.

“The time had come for hearing aids for Sylvia. I assembled a Velleman Super Stereo Ear kit (one hour of soldering) and attached it to ultra-light headphones. So, for $9.95, it outperforms two hearing aids. We are dee-lighted!

“I had a big blood pressure spike on Wednesday after calls from U.W. [University of Wiscsonsin hospital] Cardiology, which had no knowledge of my visit to the Meriter emergency room for A-fib. I had to get a second INR blood draw because the hospital didn’t have access to Meriter clinical records, so I got one of those calls, ‘Mister Roberts, according to our computer, you don’t exist.’ The problem was a war between CEOs at U.W. and Meriter. My cardiologist described the inter-hospital relationship as being like North and South Korea. My blood pressure spiked to 181/131 with recurrent A-fib. But this time I rode it out. It took 24 hours.

“Blood pressure spikes are tied to care incidents. Sylvia calls Cindy first to get to the bathroom. If Cindy is out of earshot (frequently), Sylvia will call me, which is often too late. Being on constant alert, not the cleanup, is the source of stress.

“As a strategy, I pick times to shift attention away from stressful thinking. There is an array of devices: the 23rd Psalm, Gayle Westfall’s CD, a video of Yuja Wang playing Tchaikovsky (her mid-thigh red dress helps), and cars falling off the rack at Jiffy Lube on YouTube. Also, there is watching Sylvia watch television.

“Wednesday, we’re going for the long-promised thank-you dinner for [daughter] Joni and [son-in-law] Jon, combined with the 25th anniversary celebration of Sylvia’s stroke. Don and Cindy will be along for conviviality and poop-emergency coverage.

“During our excursion to Garner Park, Sylvia said she wished Cindy would leave. She said, ‘Cindy talks to you more than I talk to you.’ This is precisely the problem with hiring personal care help. Cindy dresses Sylvia and covers considerable ‘nickel and dime’ tasks. In helping Sylvia with tasks that I had normally done, my contact with Sylvia is reduced. It’s the same third-party problem that broke up Stephen Hawking’s marriage. His wife became exhausted caring for him, but when she hired professional help, there was reduced intimacy. Hiring professional services or institutionalizing turns a marriage into a husband-patient relationship. This effectively ends marriage as one understands it. From my standpoint, there’s still more fun to be had.

“In spite of everything, I’m thriving generally and so is Sylvia. I told my bible study group that had I not become a Catholic in 2000, I’d probably be dead. Now I can approach life, and Sylvia’s care, with enthusiasm. I get some boost from WWII movies and Highway Patrol and when the broadcast programming isn’t so good, I can watch Sylvia watching television.”

Photo: Sylvia and Tom in 1991, two years after the stroke.