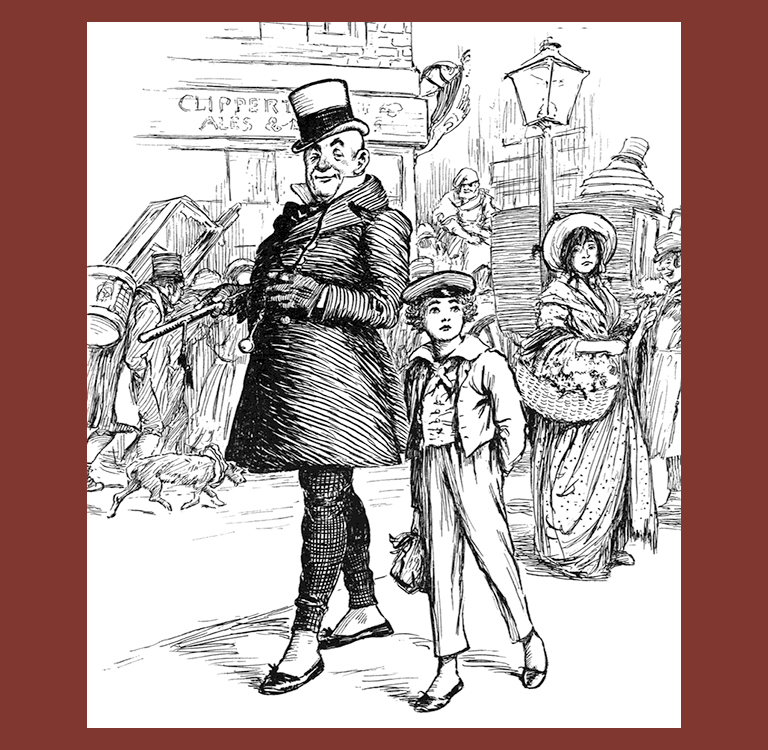 In this seven-week series, we dig into a different virtue every week. Welcome to Week Two: Courage.

He sees the downside of making too little money – misery – but for most of the book he doesn’t do much about it. Instead, he cheerfully waits for “something to turn up” while Mrs. Micawber hocks her jewelry to feed the little ones.

Mr. Micawber, played by W.C. Fields in the movie, is everyone’s favorite character. He is a good man with faults, just like the rest of us. So forgive me if I describe his lack of virtue – it doesn’t mean I don’t love him.

One (of several) virtues that Micawber could bring on board is Courage. Courage would help him overcome his distaste for finding an honest job. Instead, he gets up every morning, makes the effort to look spiffy, and says a few cheery words to his wife before leaving for the streets of London. There, he spends his day opining with friends and mooching off new acquaintances in public houses. He is courageous in the face of poverty, but when it comes to working for a living, he mentally runs the other way. His family suffers the consequences.

According to A Prairie Home Companion, Powdermilk Biscuits “give shy persons the strength to get up and do what needs to be done.” It is fun to imagine that eating a biscuit would give us the courage to overcome our aversion to tasks that are scary, difficult, or tiresome.

Eating a Powdermilk Biscuit for breakfast might cause Micawber to reflect on the love he has for his family and how satisfying it would be to give them what they need. He might imagine the harmony that having meat on the table would bring to his household. And inspired by this happy thought, he might remember, as he finishes his morning tea, having met a man who is looking to hire. The Powdermilk Biscuit could give him the courage to head not for the pub but to visit the businessman who is hiring.

After his biscuit and perhaps a prayer, Mr. Micawber could set out, having made the decision to grow in courage and still find he doesn’t feel very courageous. He confesses this to a friend, who advises him to “act himself into a new way of thinking.” That is, if he acts the way a courageous person would act, nothing can stop him from pursuing his goal, regardless of how he feels. After “acting” for a while, he finds that he is less afraid of what used to repel him.

It works in Micawber’s favor that courage — and all virtue — is a habit. The more he practices acting like a courageous person, the more he starts to own it. Before he knows it, courage becomes his new habit and he is reaping the rewards.

In fact, at the end of the novel, Micawber gets himself a job as a judge, of all things, in Australia. Dickens does not record Micawber’s transition from ne’er-do-well to community pillar, but somewhere along the line, with or without a Powdermilk Biscuit, he has decided to grow his courage and shrink his fear by making the virtue connection.

Scroll down and share a way that you stir up your courage!

10 Responses to “The Wayward Courage of Wilkins Micawber”