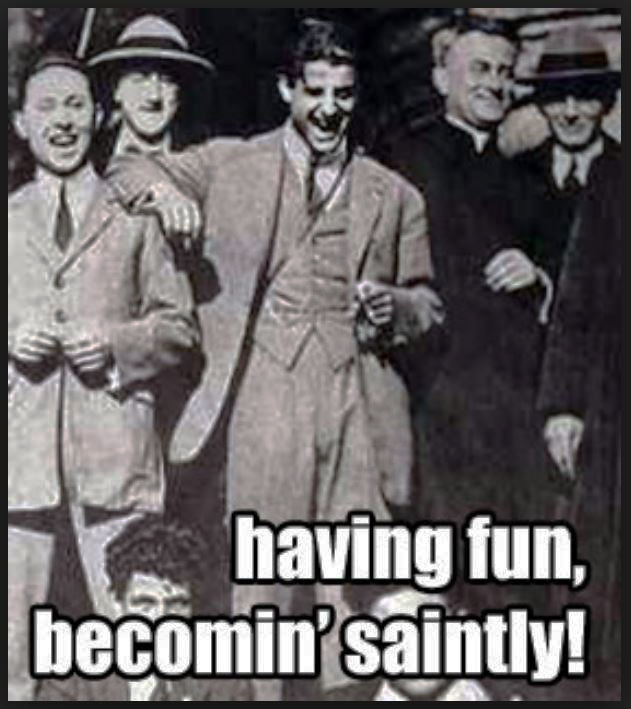 Teresa, who was known to dance around as she played her castanets, was born a few centuries too early to have met Bl. Piergiorgio Frassati (1901-1925), pictured above goofing around with his friends.

Hagiographies (lives of saints) aren’t known for their laughs, but I’ve unearthed some stories from the Ave Maria Press blog that show being virtuous doesn’t always mean being serious.

St. Bernard of Clairvaux (1090-1153)
St. Bernard, founder of the Cistercians, liked to chuckle at his overly serious monks. One day, when opening a new abbey near Foigny, France, the monks found a swarm of pesky flies filling the church that was about to be dedicated. Bernard watched his monks swatting, shooing, coaxing—all with no success. Finally, he fixed his eyes on the swarming flies and loudly declared, “I hereby excommunicate all of you.” Bernard’s monks laughed with him but found hundreds of dead flies all over the floor the next morning.

St. Bernard was focused on God (instead of the flies!), which made him free to ease the anxiety of his brothers by making a joke. Sometimes we get upset over things that would be easier to handle if we looked for the humor in them.

St. John Bosco (1815-1888)
A young priest from a very poor background, John Bosco was a hero to Turin’s hordes of homeless boys. He charmed them with his juggling act, and with his magic tricks and acrobatics. As a boy, growing up without a father, John had learned circus skills to make more money for his mother and siblings. But Father John’s fellow priests thought he was unstable. He had to be, because no one would seriously want to spend time with the “worthless” poor boys who had been abandoned and left to their own devices.

Two of Father John’s fellow priests planned to commit him to a local insane asylum. When Father John caught wind of their plot, he played along just long enough. When his fellow clerics stepped into the carriage, expecting him to follow, he slammed the door, slapped the horses into motion and told the carriage driver—“Take them to the asylum! They’re expected.”

Instead of reacting with vengeance or fear, St. John Bosco made a joke to get his point across. (I can’t help wondering what happened after this incident….)

St. Teresa of Avila (1515-1582)
After losing her footing and almost being swept away by the flooded river along which she was walking, she exclaimed, “Oh, my Lord! When will you stop putting obstacles in our path?” “Do not complain, daughter,” the Divine Master answered, “for I always do this with my friends.” “Ah, Lord,” she replied, “that explains why you have so few!”

This lady had such a close friendship with Jesus, she was even comfortable ribbing him a little bit! St. Teresa shows us that we should never be afraid to tell Jesus what’s on our hearts — because it’s what really close friends do.

St. John XXIII (1881-1963)
In this short, round, and elderly Pope, the Church enjoyed one of its funniest holy men. When asked early in his papacy how many people worked in the Vatican, he said, “About half of them….”

One day, as he arrived for an outdoor audience, he overheard two women discussing his physique. Pope John was elected right after the papacy of Pope Pius XII, a slender, aristocratic man. “My God, he is fat!” whispered one woman to her friend. The pope turned on his heels, faced the women with a smile and said, “But, Madam, you must know that the conclave is not exactly a beauty contest!”

The jolly Pope’s reply came from humility and a willingness to laugh at himself. As more and more humor in the media is targeted at belittling others, we can do our simple part to heal the culture — by just laughing at ourselves once in a while. I read once that the “proper matter for humor” is our own foibles. So, my fellow comedian, if you’re like me, you have lots of material to work with!

I’ll end with some choice quotes from someone who’s not a saint (yet!)

Mother Angelica (1923-2016)
“Try to laugh a lot, because life is funny and everybody today is too serious. The only tragedy in the world, my friend, is sin.”

“You have to enjoy life without resting in it. You have to have zest for life but a desire for heaven.”

“Even after healing and performing miracles, Jesus couldn’t get 12 friends to stick by him!” 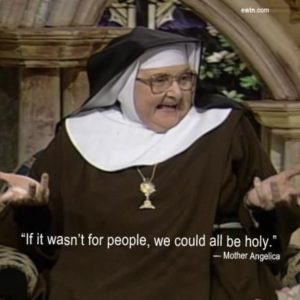 23 Responses to “Were the Saints Ever Funny? …Is the Pope Catholic?”