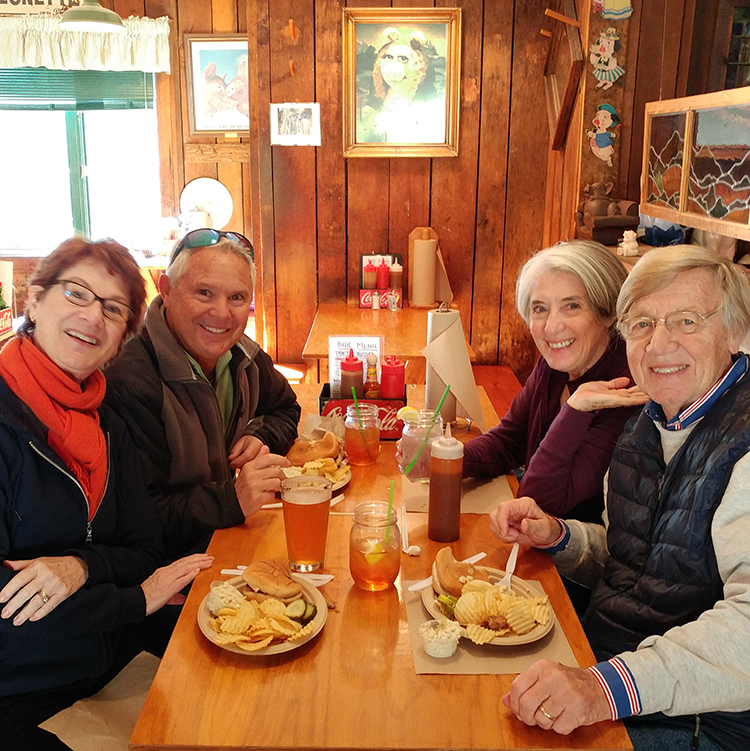 My brother Bill hosted the family at a posh cabin on a mountain near Boone, North Carolina, last week. Here, we’re having lunch in a BBQ joint with my Aunt Ginger and Uncle John. I’m drinking a beer they call “Booneshine.”

Bill’s story
Bill and I always enjoy talking about our love for God, sharing our enthusiasm, and swapping stories of God’s action in our lives. For example, a year ago, Bill was pruning a tree for a neighbor. Standing on a ladder sawing a branch, he heard the word “STOP.” He paused, but then kept sawing. The next thing he remembers is waking up in the hospital with three cracked vertebrae and a blown-out eardrum where the ladder landed on him after his fall.

“That’s what I get for not listening,” Bill said. His eyes teared up as he continued. “But I’ll never forget the feeling of having a message directly from God who is looking after me. Even though I didn’t listen, I’m so grateful he would care for me personally that much.”

What’s my part and what’s God’s part
In striving to live a more virtuous life, do we sometimes forget that God’s grace is already paid for at Calvary? Bill said most Christians he meets don’t believe that Christ paid for all our sins. “People say they do, but they don’t live like they believe it,” he said. Deep down, so many of us feel we’ve done something unforgivable.

He’s talking about the times we think we have to earn God’s love.

“I know I’m a mess,” Bill said. “I hurt people without meaning to. But I live in grace. I’m never surprised when I mess up. I don’t beat myself up for it. Jesus paid for everything. He paid for all my mess.”

Unlike those who think they have to prove themselves to God, Bill has decided to just live entirely in grace. He says that’s what’s missing in himself – and what he fails to see in his fellow Christians. I reminded him that presumption is a sin — when we figure we’re going to heaven because we’re forgiven, so it doesn’t matter what we do.

“I don’t ‘persist in sin that grace would abound (Rom 6:1)’ but I am sinner,” Bill said. “I accept it — as I accept grace. My focus now is just to live in the enjoyment of what God gives me every moment, and to do everything I do with God. Even work is play because I’m doing it with God and he’s giving me everything I need.”

His words reminded me of St. Pio’s famous exhortation, “Pray, hope, and don’t worry.” Or Brother Lawrence’s example of living in God’s presence.

Being a good receiver
We sometimes don’t know how to receive a gift as a gift, even if it’s just a compliment. Bill says that if someone compliments him on his jacket, he’s devaluing the giver if he says “Oh, this old thing?” Same with God’s gift of grace — the best response is “Thank you,” not “I don’t really deserve this.” Of course we don’t – God knows that and wants to give us everything anyway.

But accepting that takes practice.

Catholics are a “both-and” people: we believe that Mary is both Virgin and Mother; that Jesus is true God and true man. And we believe we are sinners who depend entirely on God’s mercy but at the same time strive to be closer to God by being more like him, which takes effort. My brother reminded me of the pitfall of seeing growth in virtue as “my project” rather than what it is: our response to God’s awesome grace working in us to draw us closer to him.

My challenge to you (and myself) is to spend time this Thanksgiving week pondering how God’s grace is given no-strings-attached — entirely for our freedom and salvation — and ask what your loving response will be to that free gift.

You gave me your saving shield;
you upheld me, trained me with care.
You gave me freedom for my steps….
Psalm 18

3 Responses to “How to Live in the Source of Joy”