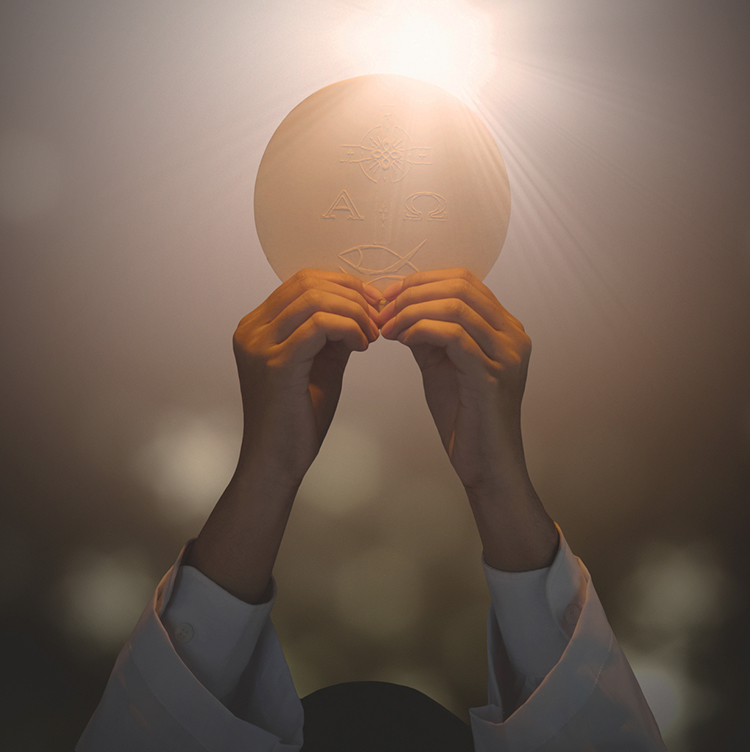 A subscriber left a comment that she was going to pray this week for people who are different than she. It made me wonder, “What does God say in Scripture about who is the ‘same’ and who is ‘different’?”

The Solemnity of Corpus Christi is a good day to ask that. Because as many grains of wheat make up one loaf, so individuals from every walk of life and nationality make up the Body of Christ.

Here’s what Paul says in Ephesians 4 about unity in diversity:

“I, then, a prisoner for the Lord, urge you to live in a manner worthy of the call you have received, with all humility and gentleness, with patience, bearing with one another through love, striving to preserve the unity of the spirit through the bond of peace: one body and one Spirit, as you were also called to the one hope of your call; one Lord, one faith, one baptism; one God and Father of all, who is over all and through all and in all.”

As if we need reminding, Paul tells us that striving for peace calls for patience. And it’s easy to forget that other people need patience dealing with us, too.

“But grace was given to each of us according to the measure of Christ’s gift. Therefore, it says:
‘He ascended on high and took prisoners captive; he gave gifts to men.’ What does ‘he ascended’ mean except that he also descended into the lower [regions] of the earth? The one who descended is also the one who ascended far above all the heavens, that he might fill all things.”

Paul tells us that Jesus Christ fills all things, that is, our hearts, with himself. That’s what gives us unity. He goes on to describe what holy diversity looks like and what it is for:

“And he gave some as apostles, others as prophets, others as evangelists, others as pastors and teachers, to equip the holy ones for the work of ministry, for building up the body of Christ, until we all attain to the unity of faith and knowledge of the Son of God, to mature manhood, to the extent of the full stature of Christ,”

“so that we may no longer be infants, tossed by waves and swept along by every wind of teaching arising from human trickery, from their cunning in the interests of deceitful scheming.”

So, what should we do when we feel tossed by the waves?

“Living the truth in love, we should grow in every way into him who is the head, Christ, from whom the whole body, joined and held together by every supporting ligament, with the proper functioning of each part, brings about the body’s growth and builds itself up in love.”

“So I declare and testify in the Lord that you must no longer live as the Gentiles do, in the futility of their minds; darkened in understanding, alienated from the life of God because of their ignorance, because of their hardness of heart, they have become callous and have handed themselves over to licentiousness for the practice of every kind of impurity to excess.

“That is not how you learned Christ, assuming that you have heard of him and were taught in him, as truth is in Jesus, that you should put away the old self of your former way of life, corrupted through deceitful desires, and be renewed in the spirit of your minds and put on the new self, created in God’s way in righteousness and holiness of truth.”

Paul’s final word is to warn us that anger is not always evil, but that sinful anger is an invitation to the devil.

“Therefore, putting away falsehood, speak the truth, each one to his neighbor, for we are members one of another. Be angry but do not sin; do not let the sun set on your anger, and do not leave room for the devil. The thief must no longer steal, but rather labor, doing honest work with his [own] hands, so that he may have something to share with one in need.

“No foul language should come out of your mouths, but only such as is good for needed edification, that it may impart grace to those who hear. And do not grieve the Holy Spirit of God, with which you were sealed for the day of redemption.

“All bitterness, fury, anger, shouting, and reviling must be removed from you, along with all malice. [And] be kind to one another, compassionate, forgiving one another as God has forgiven you in Christ.”

I’m trying to forgive, Lord, and to let you keep my heart open. Show me one constructive thing I can do today to build up your Kingdom. May the Eucharistic heart of Our Lord be praised with pure voices forever. Amen.

5 Responses to “One bread from 7.8 billion grains of wheat”