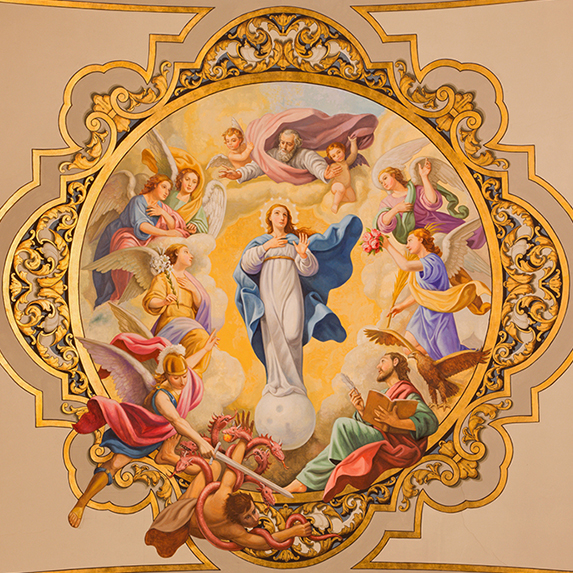 Too often I pray Mary’s Canticle, the Magnificat (Luke 1:46-55), and finish it only to realize that I wasn’t paying attention. Did something important pull my mind away? No, just the usual stuff—replaying conversations in my head or planning dinner.

During quarantine, I’ve discovered that walking outdoors helps me meditate on scripture. So, during a stroll in the park this week, the Magnificat bloomed as a rich meditation. And I want to share that gift with you!

My soul magnifies the Lord. My soul is not made to fully understand or ignore God. I am created to magnify God, who is love. That doesn’t mean I make him any larger. But if I proclaim him with my attitude and my choices, he appears larger than before to those around me. If the lens of my soul focuses on God, others can see his glory shining through me.

My spirit rejoices in God, my savior. Because I am aware of my sinfulness, I am aware of my nothingness outside of him. Everything outside of him is disaster and confusion. With him and him alone is a future with hope, which causes me to rejoice because he has saved me from hell, where my sins would have brought me without his loving intervention.

For he has looked with favor on his lowly handmaiden. There is nothing favorable in me to look at. He looks at me kindly because he is love. When he looks at me, he sees his Son in whose image I was made, and then he is able to shower me with more favor than I can even imagine.

Behold all generations will call me blessed, for the Almighty has done great things for me and holy is his name. All generations call Mary blessed because the Lord has accomplished in her his preeminent miracle in a creature, saving her from sin by the merits of his death and resurrection ahead of time. And inviting her to be his own mother!

He has mercy on those who fear him in every generation. If we accept him as sovereign and strive to be his people, we are living in the truth. If we honor him, we are seeing him as he is—mercy itself—which opens our hearts to receive his mercy and shower it on everyone we meet.

He has filled the hungry with good things and the rich he has sent empty away. Those who are hungry for his mercy, for heavenly food, for the Eucharistic Jesus—those who yearn for union with God, who yearn for heaven, who are hungry for what is eternal—will be filled with the Eternal God. But those who crave only temporal things that are passing away, they will be hungry again and again, never to be satisfied, always to be disappointed.

He has come to the help of his servant Israel, for he has remembered his promise of mercy. His Covenant is forever, regardless of our faithlessness. He has remembered our weakness and, like the “prodigal father,” takes us back the moment we look toward him.

The promise he made to our father Abraham and to his children forever. He will never forsake those who seek him, says Psalm 9A:11. He asks only that we seek him. Let us, with Mary, strive to empty ourselves so that God can fill us with his very self.

26 Responses to “Strolling Through the Magnificat With Mary”